It is the year 2020 and everyone says 3D televisi

After a very long time Somephoenics will play an

After nearly 15 years we will play our rock songs

This year we proudly present our very first best o

On Saturday the 8th of December we played our firs 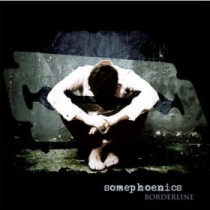 It is the year 2020 and everyone says 3D television is dead. This is only half true and since I have dealt with this topic extensively, I will tell you my 2 cents about it. For me, as a 3D fan, it has only just begun.

I always wanted to have a 3D TV, but – as an economically thinking person – I waited until my – meanwhile 15 years old – TV was obsolete.

The problem: All manufacturers without exception have stopped the production of 3D TVs. „WTF!?!“ I thought to myself and even called the market leaders who not only confirmed this to me but also told me that there are not even 3D motherboards available for repairs; in other words, if the board of a 3D TV breaks, it is replaced by a 2D board. 3D, goodbye! So what to do?

So I looked at the TVs of the future, all of which no longer support 3D playback, and found that all these new features just leave me cold. The features sound good, but in my eyes they are lame.
The latest topic is black levels. Who cares about that? When suddenly you don’t see the newsreader in his black suit anymore, but only his head and white shirt sticking out of a black spot? What use is this rich black if you can’t see anything anymore? 😉

And the next big thing is the information about the resolution. Meanwhile already 8k TVs were presented. Who should benefit from that? By the way, we have already experienced this in digital photography. At some point it’s the end of the terrain. In my opinion already now.
720p (HD ready) is already very good. 1080p (FullHD) is awesome and 4k (UHD 3,840 x 2,160 pixels) is hardly distinguishable from FullHD for my eye. But here the opinions may differ. But the main problem remains the missing content. The normal HD television still grumbles around at 720p – some (PayTV) channels sometimes broadcast in 1080i – these are then half frames, so not a real FullHD. Nobody broadcasts in 4k, except SAT test stations and streaming platforms and the selection is still quite modest, although it is of course constantly increasing.

We 3D enthusiasts are unfortunately a fringe group. Maybe comparable to the vinyl fan community. Only a few people are interested in it and only a few know how to appreciate it. So not suitable for the masses. That’s why the TV manufacturers are sparing themselves this expensive panel production and have jointly decided to say goodbye to 3D. In my eyes a terrible mistake, because at least for the 3D freaks one could always have produced at least 1 model. This is like not producing record players anymore.

My insider tip to all 3D enthusiasts: Buy the last 3D TVs of 2015 & 2016 used, because only there two technologies overlapped: For the first time there was 4k resolution paired with the dying 3D technology. The result is impressive. Because every FullHD 3D movie is excellently upscaled to 4k and therefore you see the highest resolution combined in 3D. This is simply the hammer! Better than in the cinema, because there is not such a high resolution.

One user recommended the Epson Beamer EH-LS500W with active 3D – which would be the last option if you want to buy a new device in a store. (about € 3000,- new)

I would like to thank everyone who wrote to me, because it shows me that there is definitely a demand for a certain target group, which unfortunately is ignored by the TV manufacturers. I have personally answered every email so far, but I didn’t expect so many and hardly ever manage to do so in my spare time, so I have now published my 3D 4k TV recommendations right here.

END_OF_DOCUMENT_TOKEN_TO_BE_REPLACED

After nearly 15 years we will play our rock songs for the very first time unplugged! Come to our first „Somephoenics Unplugged“ gig on Sunday, June 30th, 2019 – 6 pm at the „Addicted to rock bar“ hosted by radio 88,6. No fees!

END_OF_DOCUMENT_TOKEN_TO_BE_REPLACED

This year we proudly present our very first best of album! Yes, Somephoenics exists since 2005 – can you believe it?  END_OF_DOCUMENT_TOKEN_TO_BE_REPLACED

On Saturday the 8th of December we played our first gig with the new songs from the special album „Punk Meets 60s„. We had planned that the whole night should be a 60s / 70s rock night, so we invited „Psychedelicate“ as our support band.

END_OF_DOCUMENT_TOKEN_TO_BE_REPLACED

Only one year after „product: life“ we started with the recordings for our new special album „Punk Meets 60s„. How comes? END_OF_DOCUMENT_TOKEN_TO_BE_REPLACED

Listen to our new single on every streaming platform! We mixed American Punkrock from the 90s with some lovely elements from the 60s and call this genre now „Oldie Punkrock“. It’s really funny!  END_OF_DOCUMENT_TOKEN_TO_BE_REPLACED

Somephoenics was founded in 2005 and we always get asked what is the meaning of our bandname. So we thought let’s write a short blog article about our name. END_OF_DOCUMENT_TOKEN_TO_BE_REPLACED

Unbelievable! After 9 years somephoenics brings out the second album with all the songs you already know from the concerts but also brandnew songs which were never played live before. END_OF_DOCUMENT_TOKEN_TO_BE_REPLACED